All you need to know about Hot Springs at Volcano Lodge, Hotel and Thermal Experience 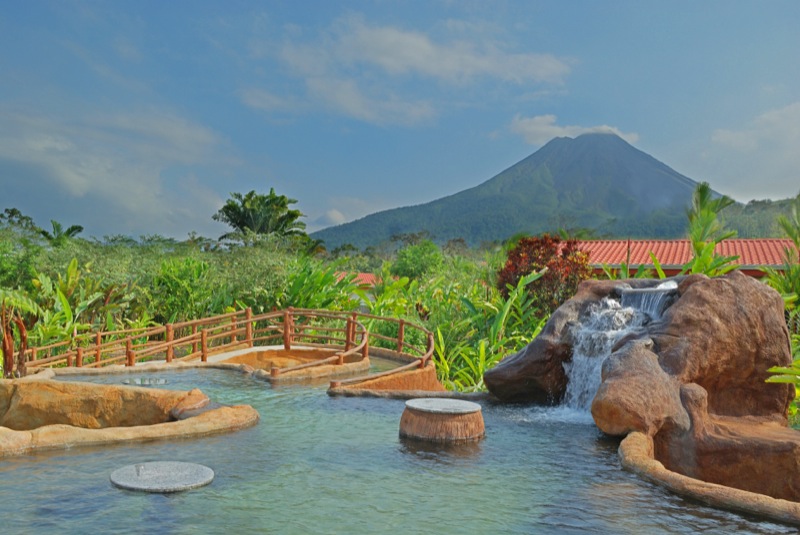 The hot springs in La Fortuna de San Carlos, and especially our property, are located approximately 2.5 km northeast of the volcano

According to research sponsored by the OVSICORI, the hot springs in the area, showed significant changes in various physico-chemical parameters of the water in mid-2010, however after these changes the values of these parameters remained stable with very few fluctuations over the past few years:

It is called thermal water, mineral water coming out of the ground more than 5° C surface temperature.

These waters come from underground layers of Earth that are at a higher temperature, which are rich in various mineral components and allow their use as therapeutic baths, inhalations, irrigations, and heating. Usually found along fault lines magmatic because groundwater can be introduced and heated at a certain depth; hence, after rising as vapor (which may condense to reach the surface, forming a geyser) or hot water.

Mostly, the waters of the Arenal Volcano area is categorized into:

Sulphide and sulphurous waters: predominantly sulfur.
Sulfate waters: besides sulfur may include sodium, calcium, magnesium or chlorine in its composition.

Widely used in the field of medical hydrology, the former are acidic and muddy.

Effects of thermal water in the human body

The mineralized water from the hot water has different effects on the human body. Some authors divide them into three, biological, physical and chemical, but in reality all act at the same time.

Bathing in thermal water increases body temperature, killing germs, including viruses, also increases the hydrostatic pressure of the body, which increases blood circulation and oxygenation. This increase in temperature helps dissolve and eliminate toxins from the body.

By increasing oxygenation, bathing in hot water leads to improved nutrition of the tissues of the body in general, why increases metabolism, while stimulating the secretions of the digestive tract and liver, thus helping the digestion.

Take repeated baths (especially in periods of 3-4 weeks) can help normalize the functions of the endocrine glands and the general functioning of the body’s autonomic nervous system. There is also an improvement and stimulation of the immune system, mental relaxation, endorphin production and regulation of glandular functions. Many of these effects are due to the consumption of the body of minerals such as carbon dioxide, sulfur, calcium and magnesium.

There are skin conditions that can have a marked improvement in hot spring baths (especially if they contain sulfur). Diseases that benefit most are psoriasis, dermatitis and fungal diseases. Sometimes also help in the healing of wounds and other skin injuries. Sometimes this action is attributed to the “sulphobacteries” (isolated by the “International Society of Medical Hydrology” organism, to explain the effects of the “intangibles” of the hot springs)

Not too many years ago, a microorganism was isolated – the “International Society of Medical Hydrology” – studying precisely what is called “intangibles” of the hot springs. The organism isolated, belongs to what is called today “sulphobacteries”. It has been reported that this group of microorganisms help the human body to improve the defense system of the skin against all types of attacks. Likewise, help to reduce the aging process of the body.

In summary form, the chronic diseases that are benefited with the use of balneotherapy, according to research by Dr. Yuko Agishi are:

Naegleria fowleri is a free-living aerobic ameboflagellated pathogenic warm typical of freshwater such as lakes and backwaters, lagoons, ponds, pools, hot springs and irrigation canals. It is a facultative parasite that can produce amoebic meningoencephalitis in humans.

Naegleria has a universal distribution. Have been described in the environment, proliferate in fresh water, soil, sewage, sludge, wastewater, swimming pool water, sand, throat swabs and / or nose. Have also been isolated from the dust-contaminated air. This species is thermophilic and tolerate temperatures of 40-45 ° C unlike other nonpathogenic species.

How does infection with Naegleria fowleri occur?

Naegleria fowleri causes infection in people with water when the amoeba enters the body through the nose. This usually occurs when people go swimming or diving in warm freshwater places, like lakes and rivers. Naegleria fowleri amoeba rising from the nose to the brain where it destroys brain tissue.

How the risk of Naegleria fowleri infection compared with other water-related risks?

How I can reduce the risk of infection with Naegleria fowleri?

Naegleria fowleri causes infection in people with water when the amoeba enters the body through the nose. Infections are rare and usually occur when people go swimming or diving in warm freshwater places, like lakes and rivers. Rarely infections have been reported in people who dipped his head; when people suck water up the nose; when people clean their nose for religious practices or sinuses (nose) are irrigated, or using contaminated tap water. Naegleria fowleri amoeba can grow in plumbing, heating and water supply systems, including public systems of potable water.

Prevention measures that people should take to reduce the risk of Naegleria fowleri infection with, should focus on limiting the amount of water entering through the nose.

Therefore it is important that you know:

Some general recommendations for the use of the hot springs are: